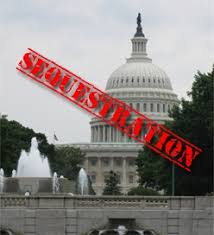 When politicians and newscasters talk about sequestration, or "sequester cuts," they are referring to a fiscal policy enacted by Congress to deal with the federal budget deficit. Sequestration first appeared in the Gramm-Rudman-Hollings Deficit Reduction Act of 1985.  Simply defined, “sequestration” is the automatic cancellation of budgetary resources.  The Budget Control Act of 2011 (BCA) established a bipartisan 12 member Joint Select Committee on Deficit Reduction  charged with reducing the deficit by an additional $1.2 - $1.5 trillion over ten years. The BCA also included a sequestration hammer should the super committee fail, a provision intended to “force” the super committee to act.  Under sequestration, an amount of money equal to the difference between the cap set in the BCA and the amount actually appropriated is "sequestered" by the Treasury and not handed over to the agencies to which it was originally appropriated by Congress.

Despite the threat of sequestration, the Joint Select Committee failed, and announced its inability to agree in November of 2011.  Accordingly, as established in the BCA, sequestration was triggered when the Joint Select Committee failed to agree. Sequestration is scheduled to generate automatic cuts for each of nine years, 2013 through 2021, totaling $1.2 trillion. Sequestration was originally scheduled to take effect on Jan. 2, 2013. However, it was delayed for two months - until March 1, 2013, by the deal struck on New Year's Eve, called the American Taxpayer Relief Act of 2012.
Now, without Congressional action to prevent sequestration, the first round of cuts will take place on March 1, 2013.

Will Sequestration Actually Happen?
No one knows.  The prospect of sequestration has come to seem so catastrophic that Congress so far has been unwilling to actually let it happen. Instead, Congress has repeatedly delayed the effective date or raised the Budget Resolution spending caps upward toward the end of the legislative session in order to match the actual totals already appropriated.  Whether this session of Congress will allow sequestration to occur or not remains to be seen.

The 2013 cuts apply to “discretionary” spending and are divided between reductions to defense ($500 billion) and non-defense ($700 billion).

How do These Impending Cuts Affect Seniors and Veterans?
“Discretionary spending” does cover government programs for poor and vulnerable citizens.  However, the Medicaid and Veterans benefits programs are specifically exempted from the Sequestration plan and will not be affected at all.

What Can I Do to Plan?

The Sequestration cuts will be devastating to many when they occur.  We here at The Fairfax Elder Law Firm of Evan H. Farr, P.C.  are thrilled, however, that Veteran’s Pension Programs and Medicaid are seen as mandatory items and will not be affected in these cuts.  As always, we urge you to plan ahead for your future and for your loved ones.  Call us today at 703-691-1888 to set up a free consultation.