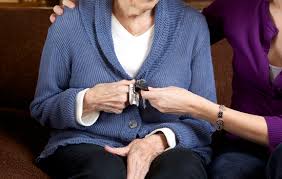 It is often difficult to talk to an elderly family member about giving up their car keys — especially if the older person doesn’t agree that continuing to drive will be risky.

Often, families are making the tough choice between safety and independence on their own. There is new evidence, though, that doctors could have more of an influence on one of the toughest decisions facing an aging population.  A study that was recently cited in an Associated Press article found that when doctors warn patients that the older folks may be medically unfit to be on the road, there is a drop in serious crash injuries among those drivers.

The American Medical Association recommends that doctors administer a few simple tests in advising older drivers. Among them:

Dr. Gary Kennedy, geriatric psychiatry chief at New York’s Montefiore Medical Center, often adds another question: Are his patients allowed to drive their grandchildren? “If the answer to that is no, that’s telling me the people who know the patient best have made a decision that they’re not safe,” said Kennedy.

At The Fairfax Elder Firm of Evan H. Farr, P.C., we urge families to sit down with their loved ones who are affected by poor eyesight, chronic disease, and medications that might impair driving and talk about your concern for their safety on the road.  Elderly drivers and family members should also take heed of the laws in your state regarding vision tests, restricting of mail renewals, and road tests.  For more information about Aging Drivers and the Law, see the article on the Fairfax Elder Law Firm of Evan H. Farr, P.C. website.  For tips on talking with an unsafe driver (with dementia or Alzheimer’s), click here.