President Obama is proposing a 45% estate tax after the current 35% rate expires on Jan. 1, 2013. His proposal would exclude from the tax the first $3.5 million of an estate's assets, down from the current threshold of $5.12 million. 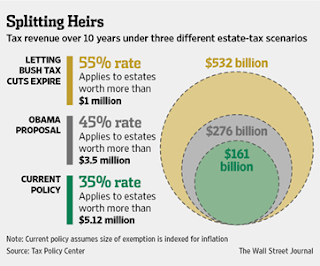 Under his proposal, nearly 7,500 estates would owe taxes next year, compared with 4,000 if current policy continued. The proposal would raise $276 billion over 10 years, which makes it a large part of President Obama's deficit-reduction plan.

If the White House and Congress take no action, the current tax cut will expire, and the rate will rise to 55% next year and apply to assets above $1 million (see graphic).

While Democratic lawmakers generally support Mr. Obama's call to raise individual tax rates on high earners, a steeper estate tax is another matter. At least six Senate Democrats feel very strongly that the rate should remain at 35% and apply only to inheritances above $10 million.

Those who oppose the tax say it hurts family businesses and farms, which may have to sell all or part of their operation just to pay the estate taxes. That argument is often countered with findings that very few farms and family-run businesses have to pay an estate tax to begin with (less than 50 in total last year). Read the article.

We here at The Law Firm of Evan H. Farr, P.C. hope you agree that proper Estate Planning is essential. To make an appointment for a free consultation, call us at 703-691-1888. Mention this article and receive a 20% discount on Estate Planning before the end of 2012.
Posted by Unknown at 10:03 AM