It is hard to imagine sick children could be seriously implicated and affected by public insurance disparities...federal law, after all, prohibits discirminatory treatment between patients who receive public vs. private insurance. But what about acceptance into such facilities, before they are patients?

A new study examining facilities in Illinois claims "Sick children covered by Medicaid or the Children's Health Insurance Program (CHIP) must wait twice as long as youngsters with private insurance to get an appointment with a specialist." (Reuters Health).

According to one of the authors, "this [study] is the first to take a comprehensive look at specialty care in children."


The study tracked actors – female callers posing as mothers – who called specialty clinics for serious conditions afflicting their children.
These “callers” even went so far as to list specific conditions that their children were suffering from, like seizures and diabetes, which presumably these clinics had no reason to doubt the legitimacy of.
Two-thirds (66%) were denied appointments when the caller indicated the child was covered by Medicaid.  On the other hand, the clinics denied about one-tenth (11%) of callers claiming to have private insurance.
It doesn’t end there.  Children supposedly receiving Medicaid-CHIP insurance received a 22 day extra waiting period, on average,  as opposed to when these clinics *thought* the caller had private insurance.  MSNBC reported that the disparity was seen across numerous fields: "The trend was seen across all seven specialties tested -- orthopedics, psychiatry, asthma, neurology, endocrinology, otolaryngology and dermatology." 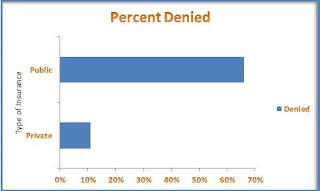 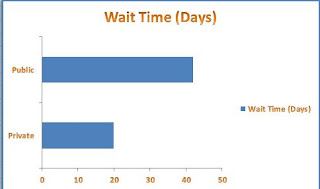 We've reported on the growing number of young people in nursing homes and the problems that can arise. We noted in our January 10 post, "[that]more than 200,000 people living in such facilities under the age of 65."  Let's hope this study serves as a wake-up call.